Home › Biofuels › The US Military: A Lean, Green, Fighting Machine

The US Military: A Lean, Green, Fighting Machine 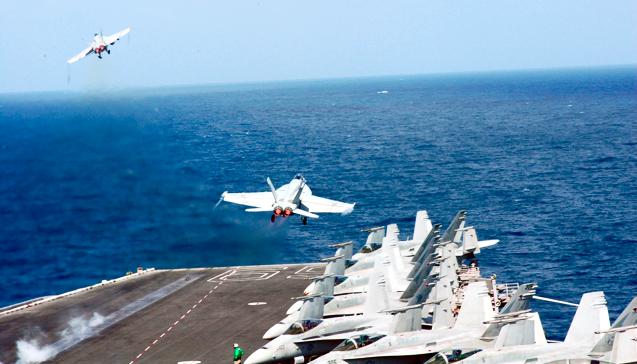 The F/A-18E Super Hornet takes off from the USS Dwight D. Eisenhower

On August 10th the Secretary of the Army John McHugh declared the Army would reduce  its fossil fuel consumption by 25% by 2025. To achieve this within budget the Army’s new taskforce must raise $7.1bn from private sources and attract renewable energy experts.

This is certainly positive news for the alternative energy industry, especially alternatives for mobility such as biofuels and energy storage. The US Navy also has ambitious goals for renewable energy use that are already producing results.

-The military accounts for 2% of total oil energy used in the US and 95% of federal government oil consumption.  A shift of much of this demand should have significant positive effects on the economics of renewable energy technologies.

-Military lives are lost when protecting supply chains, ie one life for every fifty convoys transporting oil to US troops in Afghanistan. Reducing the number of convoys should therefore save lives.

Early in 2010 Secretary of the Navy Ray Mabus announced that by 2020 at least half of the Navy and Marine Corps’s energy use – he puts them in the same basket – would be supplied by non-fossil fuels. This announcement followed President Obama’s request for the Department of Energy, the Department of the Agriculture, and the Navy to come up with ‘commercially viable’ alternative fuels.

Mabus discussed the Obama request enthusiastically in a recent interview on National Public Radio interview (on the Diane Rehm Show), embracing the merits of renewables as strategic, since they reduce US dependence on uncertain supplies of oil from abroad; tactical, since they save lives; and potentially economical.  If military demand can force down costs as producers scale up production to levels where  the cost of renewable energy is no greater than the cost of energy from fossil fuels, all interests in Congress will support further development of renewables.

The Navy expects significant payback from its investments in solar, tidal, hydrothermal, and geothermal in just five years.  To gauge the size of development projects, Mabus quantified Navy/Marine Corps real estate at  3.3 million acres of land, and 72,500 buildings.  For half of its bases the Navy aims to have net-zero fossil-fuels energy usage by 2020.

Contrary to these other options, biofuels are relatively expensive, requiring further R&D to discover the commercially viable ones.  The Navy aims to slash fossil fuel consumption by 50% in its vehicles in the next four years.  Its research has three key criteria: the feedstock must be non-edible, it must be grown in the US, and the new fuel must not require changes to existing Navy/Marine Corps machinery. Today, the F18 Green Hornet fighter plane travels at 1.7 times the speed of sound on a fuel composed of 50% camelina bio-fuel and 50% jet fuel.  Camelina was selected by the Pentagon because it does not compete with food crops and has been proven to reduce carbon emissions by more than 80 percent.

Navy demand has already brought down bio-fuel prices dramatically. Defense contractors will do the remaining work. They’re now being pressured to recommend solutions that consume less energy over the system’s  entire life. Today the Navy’s  requests for proposals (RFPs) for biofuel are the biggest ever.

With the Air Force already on board, adding the Army to the pool of demand might do the trick to persuade Congress to support alternative energy for national security and cost reasons.  Importantly, the military’s commitment to reducing fossil fuel usage might also spur Congress to the enact a CO2 tax or a cap-and-trade regime that would have similarly beneficial results on domestic energy markets and security.